To be fair, this arose from a suggestion in a ‘what could we do better’ feedback form at the end of the previous year’s seminar – that it would be really interesting to hear from a ‘real’ consumer as to what they thought of the freefrom offer. And, if the number of questions our coeliac was asked after her presentation and during the course of the day are anything to go by, they certainly did find it interesting. 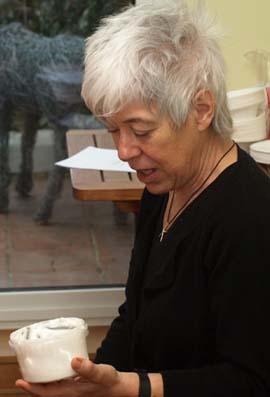 Our ‘real live coeliac’ (seen here mulling over a pot of coconut yogurt at last year’s FreeFrom Food Awards judging) was Sue Cane, a keen foodie and a keen beer drinker who was diagnosed with coeliac disease about five years ago.

While Sue was postively fulsome in her praise of freefrom manufacturers who have massively improved the quality, quantity and availablilty of gluten-free food over the last few years, she left her audience in no doubt about how horribly restricting a strict gluten-free diet can be – especially if, as in Sue’s case (she works in the film industry), you are constantly out and about and never know where your next meal may come from.

‘How often’, she asked, ‘do you guys give your next meal a second thought?  Well, I have to, all the time. And not only think about it but carry it around in a bag in case there is nothing available that I can eat. Would you ever think of taking a sandwich out to supper, or smuggle one into a funeral, just in case there is nothing there that you can eat? Well, I do…. Because eating just the tiniest gluten-filled breadcrumb can lay me out cold for  three days. And when someone has flown you half way round the world to make a film, you really cannot afford to be taking three days off work because you have mistakenly eaten a breadcrumb….’

Coeliacs, as she said, obsess continually about food – and whether, if they go out, they will be able to find anything they can eat. If they can’t the options are starve, make yourself seriously ill – or stay at home.

And gluten is absolutely everywhere, and in all those places where you would expect it not to be: cream cheese, oven chips, the tongs serving a gluten-free cake, even on a supermarket check out belt… And that is discounting the hundreds of foods which should not contain gluten, but still do… cream cheese, crisps, roast potatoes, tomato ketchup, catering mashed potatoes, meringues….

Forget the morning paper, a coeliac’s daily reading is ingredient labels – and not only the labels on new foods but those on foods which you have eaten for years and believe to be ‘safe’ as you never know when the recipe may change and suddenly it is safe no more. And although labelling is getting better, and allergen boxes are very helpful, much of it, including the dreaded ‘may contain’ warnings, is still very confusing and seriously un-informative.

As for eating out…… Sue could have spent a full day on her tales of woe at restaurants but her main concern was finding snacks; there will always be something you can eat at a restaurant, even if it is only a baked potato or, one on particularly awful Boxing Day outing, a packet of crisps. But, when trying to eat on the run (motorway service stations, cafés etc) if you do not take your own, you may very well not get anything to eat at all.

And, worst of all, especially for a beer drinker, is that, as a coeliac, you can never go into a pub for a pint……

Sue’s message to the assembled throng – please, please try to think like a coeliac – so do not add gluten to the potato crisps, or to the soya sauce – or to any food for which it is not absolutely essential. And look to produce products, especially catering products, that bridge the mainstream and freefrom. Many of the gluten-free batters, sausages, veggie burgers and biscuits that we have tasted at the FreeFrom Food Awards judging sessions have been absolutely good enough to serve to non-coeliac customers – they would never even notice the difference!

Previous Post: « Dodgy drugs and a pill that treats and tells
Next Post: 35 million family plots produce 77% of Russia’s vegetables and 60% of its meat…. »

Leaving home for the first time in your late teens or early 20s is seriously exciting – and seriously scary. Whether you are moving out to get a job or to go to university, this may the first time you have ever lived away from home, had to do your own washing, pay your own …

Last month the Anaphylaxis Campaign hosted a fascinating webinar with Carole Bingley from Reading Scientific Services Ltd (RSSL) and Hazel Gowland of Allergy Action. They looked at both plant-based and novel proteins and the risk that they might pose for the allergic community. Carole Bingley, Technical Specialist Product Innovation, RSSL The drivers for the growth …

An excellent recent post on Alex Gazzola’s AllergyInsight blog covers several subjects (including a recent Anaphylaxis Campaign webinar on novel proteins on which more anon) but homes in on the current battle between the vegan and dairy lobbies, both claiming the moral high grand in the environmental debate. The truth is, of course, that if …

It is with great sadness that I have to report the death on January 20th of Pat Schooling, the Director and moving spirit behind Action Against Allergy.  She was 93. AAA, founded by Amelia Nathan Hill in 1978, was the first charity to be set up to support those with undiagnosed food allergy and intolerance. …